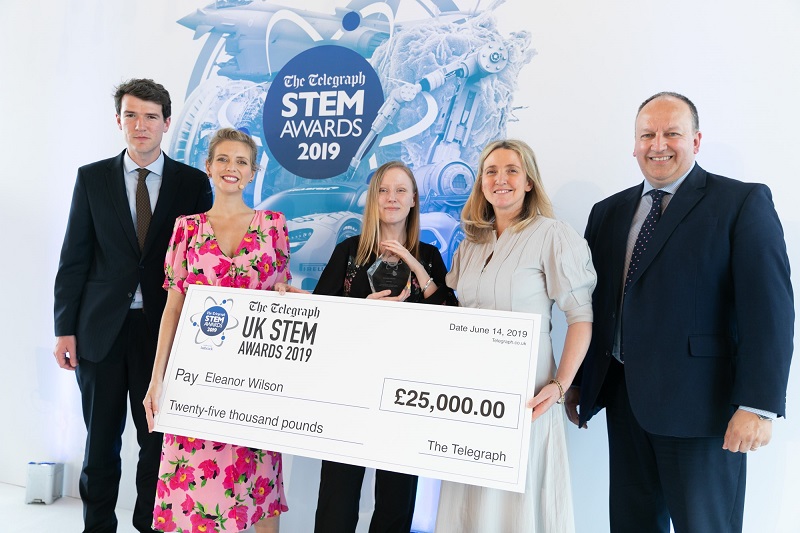 Eleanor Wilson (centre), MBiol third year student at Aberystwyth University’s Institute of Biological, Environmental and Rural Sciences, receiving her prize of £25,000 as the overall winner of The Telegraph STEM Awards 2019.

A radical proposal by an Aberystwyth biochemistry student for a portable test to detect TB in humans has won the top prize in The Telegraph STEM Awards 2019.

Eleanor Wilson came up with the idea of using the CRISPR gene editing platform to diagnose TB in humans during the third year of her MBiol degree at Aberystwyth’s Institute of Biological, Environmental and Rural Sciences (IBERS).

Selected from a field of over 10,000 entrants for this year’s prestigious award, Eleanor initially won the Healthcare category of the awards in April 2019.

A month later, she was named overall winner across all five categories of The Telegraph STEM Awards at a special ceremony in London picking up a prize of £25,000 as well as bespoke work placement with global healthcare company GSK.

Speaking about her submission, Eleanor said: “I think CRISPR gene editing has huge diagnostic potential - but we currently diagnose disease in a similar way that we did in the 20th century, largely by looking at symptoms.”

Her solution proposes a portable device equipped with CRISPR technology, which produces visual results – much like a pregnancy test.

“You don’t need trained laboratory staff or facilities to administer it, it’s easily transportable and relatively cheap,” says Eleanor. “For rural settings, you could transport multiple kits via drones.”

Professor Iain Donnison, Head of IBERS at Aberystwyth University, said: “We extend our warmest congratulations to Eleanor on her outstanding success in this year’s Telegraph STEM Awards. She is an exceptionally bright and able student who has thrived in the research-intensive environment here in IBERS. We look forward now to seeing Eleanor further develop her inspirational idea for harnessing the latest technology to detect TB in humans and make an impact on real lives.”

Now in their sixth year, the Telegraph’s annual STEM Awards offer undergraduates the chance to prove their talent to some of the biggest names in industry.

Eleanor says her course at Aberystwyth University was key to her proposal: “I wanted to study here at Aber because the course is unique in combining genetics and biochemistry and also offers training in bioinformatics - the application of computer science techniques to biological data.

“I also love living here – the outdoor lifestyle and the outstanding accommodation at Fferm Penglais. I hope to further pursue my studies by doing my PhD here too.”

You can find out more about Eleanor’s winning idea in a short online film produced by The Telegraph STEM Awards team.