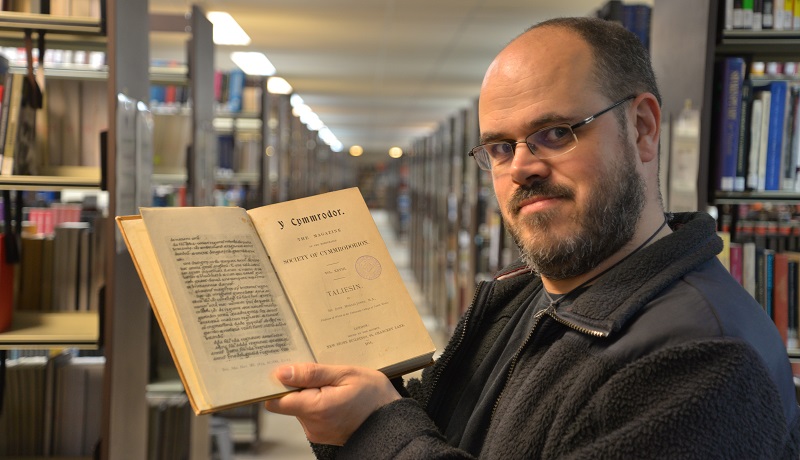 Dr Simon Rodway and the original copy of ‘Taliesin’ by John Morris-Jones.

The anniversary of two distinct volumes of Welsh literature will be celebrated at Aberystwyth University on Saturday 24 November 2018.

To mark the centenary of Taliesin by John Morris Jones and the eightieth anniversary of Canu Aneirin (Poems of Aneirin) by Ifor Williams, distinguished academics from Aberystwyth, Bangor and Oxford will share their impressions and interpretations at this special conference entitled John Morris-Jones, Ifor Williams a’r Hengerdd.

The conference, which is free to attend and open to the public, will be held at Medrus Conference Centre, Aberystwyth University.

Invited speakers include Professor Patrick Sims-Williams and Professor Marged Haycock, both Emeritus Professors at Aberystwyth University, Professor John Koch from the University of Wales Centre for Advanced Welsh and Celtic Studies,  Dr Alexander Falileyev and Professor Peredur Lynch from Bangor University and Angela Grant, who has just completed her doctorate at Oxford University.

The conference convener, Dr Simon Rodway is a lecturer at the Department of Welsh and Celtic Studies at Aberystwyth University.

According to Dr Rodway, this conference aims to celebrate the contribution made by John Morris-Jones and Ifor Williams, and to consider their work in view of recent research.

Dr Rodway said: “‘Taliesin’ (Y Cymmrodor 28) was a review of Poems from the Book of Taliesin by Gwenogvryn Evans (1915), which was described by Morris-Jones as ‘one huge mistake’, but it was much more than that as it included editions of  poems attributed by Morris-Jones to the historical Taliesin, a poet who lived in the sixth century.

“It is fair to say that ‘Taliesin’ set the foundations for the modern study of early Welsh poetry. These foundations were built upon by Ifor Williams in particular, a pupil of Morris-Jones’s, who published pioneering editions of some of the most important early poems, including Canu Aneirin in 1938, an edition of the Gododdin attributed to Aneirin, who was a contemporary of Taliesin.

“The ideas of both Morris-Jones and Ifor Williams around the work of Taliesin and Aneirin have been challenged over the decades, yet they remain hugely influential, particularly at a popular level” he added.

The John Morris-Jones, Ifor Williams a’r Hengerdd conference is organised by the Department of Welsh and Celtic Studies at Aberystwyth University and the School of Welsh at Bangor University and is funded by the Coleg Cymraeg Cenedlaethol.

The conference will be held at Medrus Conference Centre, Penglais Campus, Aberystwyth on Saturday 24 November 2018 between 10am and 4pm. Free admission. Simultaneous translation will be available.