Smart snails get stressed when lonely 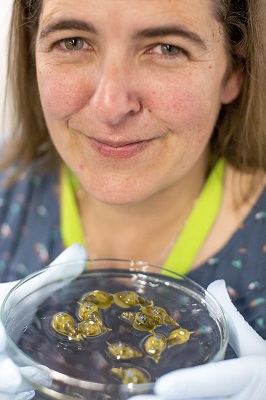 A study by a researcher at Aberystwyth University into how social isolation affects snail responses to stress has been published in the latest edition of the Philosophical Transactions of the Royal Society Journal.

The paper by Dr Sarah Dalesman ’Habitat and social context affect memory phenotype, exploration and co-variance among these traits’ appears in a special edition of the journal on Causes and consequences of individual differences in cognitive abilities 10.1098/rstb/373/1756.

Dr Dalesman is a Lecturer in Freshwater Biology at the University’s Institute of Biological, Environmental and Rural Sciences and a snail behaviour expert.

Dr Dalesman said: “Social isolation is known as a stressor for a lot of animals and humans, causing changes in behaviour and negatively affecting their ability to learn and form memories. However, individuals respond differently to the effects of stress, and some may be able to cope better than others.”

The study looked at whether individuals that form strong memories in unstressed conditions respond differently following social isolation, to those that normally form weaker memories.

The study tested how social isolation affected the snails’ ability to form long-term memory, which in the case of a snail means a single day.

There is a lot of interest in how memory relates to other behavioural traits in animals. The work explored how isolation affected the way snails explore new environments, and whether there was a relationship between memory formation and exploration behaviour.

So, it seems that snails which normally form weaker memories are more robust to the effects of stress from being socially isolated.

The effect of isolation on exploration behaviour also differed depending on their ability to form memory.

Snails that normally form weak memories did not change their exploration behaviour following isolation; where as those that form strong memories decreased their crawling speed and time spent in contact with the behavioural arena wall (thigmotaxis).

Dr Dalesman added: “These results show that social context can alter our conclusions about how 'smart' an animal is. Snails that form stronger memories in groups form the weakest memories in isolation and vice versa. It also shows that the relationship between exploration behaviour and memory changes when the social context is altered.”

Study at the Institute of Biological, Environmental and Rural Sciences