‘Giant of the media industry in Wales’ awarded Honorary Fellowship 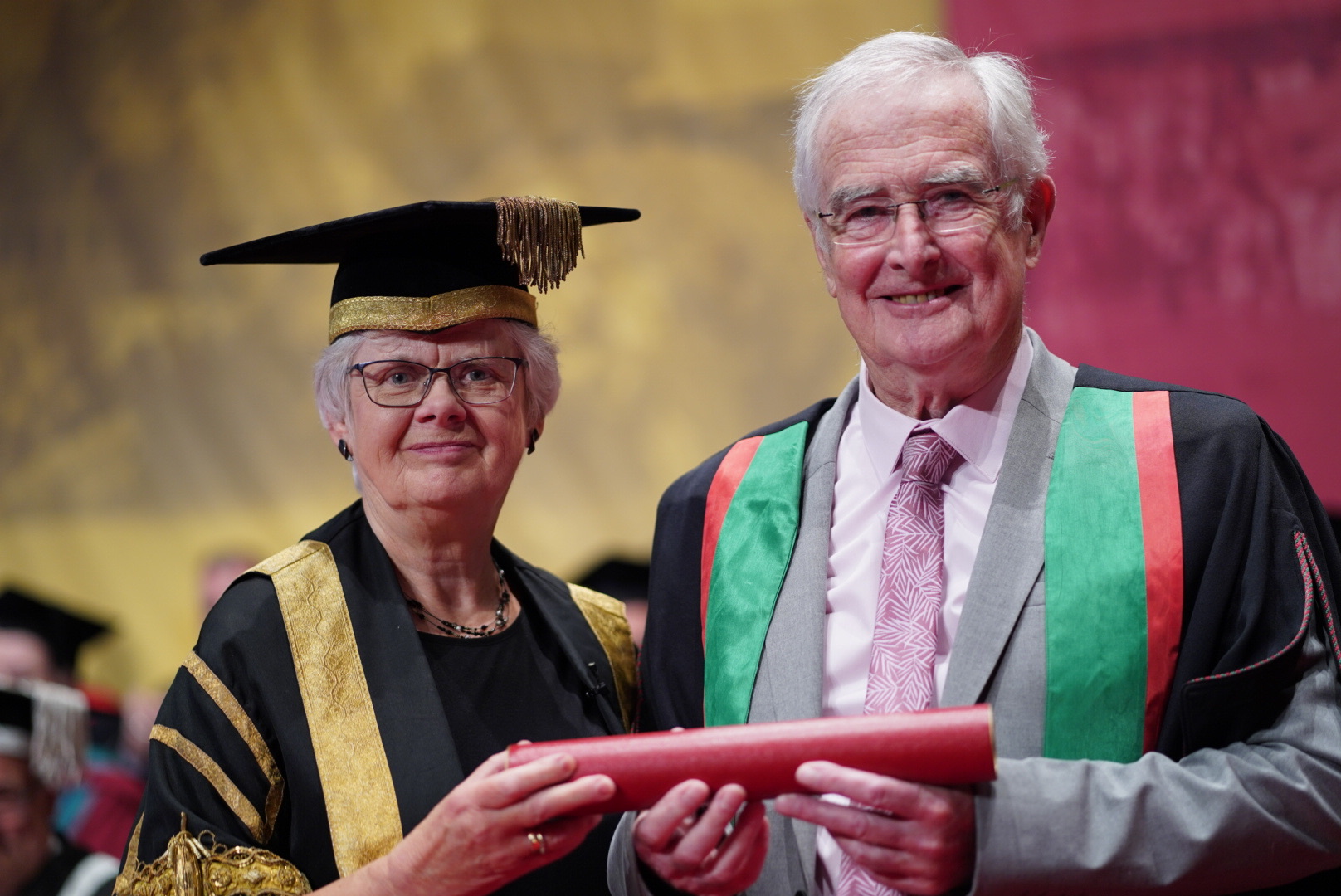 The broadcaster and seminal figure in Welsh media, Euryn Ogwen Williams, has been honoured as a Fellow of Aberystwyth University in recognition of his contribution to the cultural life of Wales.

Brought up in Leeswood near Mold in Flintshire, Euryn Ogwen Williams graduated from the University of Wales Bangor in Philosophy and Psychology.

From 1964-1981, he produced and directed a wide range of programmes for BBC, ITV company Television Wales and the West (TWW) and HTV as well as the independent sector.

When Welsh language broadcaster S4C was set up in 1982, he became its first Director of Programmes, and was the channel’s deputy Chief Executive Officer from 1988 until 1991.

In March 2018 he led an independent review of S4C for the Secretary of State for Digital, Culture, Media and Sport.

He has published two volumes of poetry and a series of papers on the changing media scene. He lectures and advises on media and is a regular contributor to television and radio programmes.

Euryn Ogwen Williams was presented by Dr Jamie Medhurst from Aberystwyth University’s Department of Theatre, Film and Television Studies on Wednesday 18 July 2018. The full conferral presentation is available below.

Pro Chancellor, Vice-Chancellor, prospective graduates and supporters.  It is an honour and a privilege to present Euryn Ogwen Williams as a Fellow of Aberystwyth University.

In his biography, Euryn describes himself as a ‘media consultant’. But the man you see before you is much more than this. He is a giant of the media industry in Wales, with a career in broadcasting which spans over fifty years.

Fe’i ganed ym Mhenmachno yng Ngwynedd a’i fagu yn Leeswood, ger Yr Wyddgrug yn Sir y Fflint. And when the time came to fly the nest he attended what was then the University College of North Wales Bangor (but we’ll forgive him for that) and graduated with a degree in Philosophy and Psychology.

He began his illustrious career as a presenter with the ITV company Television Wales and the West, TWW, based in Cardiff – I could sing you the TWW station ident – or maybe we could duet – or maybe not … see me after, maybe. He went on to produce and direct a wide range of programmes for TWW, Harlech Television/HTV, BBC and the independent sector.

In March 2018 he completed and published an independent review of S4C for the Secretary of State for Digital, Culture, Media and Sport in the UK government and was giving evidence on the report to the Welsh Affairs Committee a fortnight ago.

Mae Euryn wedi cyhoeddi dwy gyfrol o farddoniaeth yn ogystal â chyhoeddi nifer o bapurau a phamffledi ar y byd cyfryngol. In addition to publishing two volumes of poetry he was the president of the Vale of Glamorgan National Eisteddfod in 2012 and he and his wife Jenny live in Barry and have two children and three grandchildren – plenty to keep him busy!

His contribution to the world of broadcasting was acknowledged in 2016 when he was presented with the Lifetime Achievement Award at the Carmarthen Bay Film Festival. And if you’re planning to attend the National Eisteddfod in Cardiff this year, BAFTA Cymru have an evening to pay tribute to Euryn for his remarkable contribution to Welsh broadcasting – or as BAFTA say, to pay tribute to his ‘influential career’.

Ond dyma’n cyfle ni i dalu teyrnged am gyfraniad Euryn i fywyd diwylliannol Cymru. Today, however, we have an opportunity to thanks Euryn and to honour him for his contribution to the cultural life of Wales.

Pro Chancellor, it is my absolute pleasure to present Euryn Ogwen Williams to you as a Fellow of Aberystwyth University.

An Honorary Bachelor of Arts Degree will be awarded to Sue Jones-Davies, actor and singer, town councillor and former Mayor of Aberystwyth.