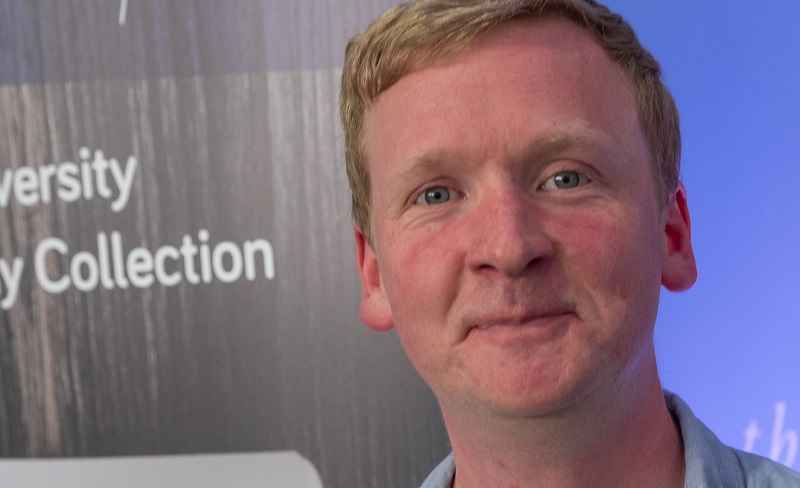 A collection of essays on hearing loss by an Aberystwyth University creative writing student has been hailed the winner of an award hosted by literary magazine New Welsh Review.

Fiction as a Hearing Aid by Ed Garland, expertly examines how literature can provide comfort and clarification to those with hearing difficulties.

Ed, who is currently studying for an MA in Creative Writing at the Department of English and Creative Writing, was announced as the winner of the New Welsh Writing Awards 2018: Aberystwyth University Prize for an Essay Collection at the Hay Festival on Tuesday 29 May.

The prize comprises a £1,000 advance on an ebook deal, published under the magazine's book imprint New Welsh Rarebyte, together with a critique by London literary agent and Awards partner Cathryn Summerhayes of Curtis Brown.

The themes highlighted in Ed’s essays have also been set in a short animated film by Aberystwyth University graduate Emily Roberts.

The New Welsh Writing Awards, unique to the annual writing prize calendar in its championing of long-form writing, celebrated the essay collection form this year.

Since its inception in 2015, the annual awards have received well over 200 entries; the winner in 2015, Eluned Gramich who won with Woman Who Brings the Rain, went on to be shortlisted for the Wales Book of the Year in 2016.

Gwen Davies said of Ed Garland’s winning collection of essays that it is “an intelligent, rigorous, personal, humorous and compelling presentation of words as soundscape.”

Ed Garland’s success builds on a successful week for the Department of English and Creative Writing which has been rated second in the UK for student satisfaction with teaching and feedback in the 2019 Guardian University Guide published on Tuesday 29 May.

Dr Louise Marshall, Head of the Department of English and Creative Writing said: “The Department are absolutely delighted for Ed and we are incredibly proud of his well-deserved success. Ed’s work is at the cutting-edge of research in the humanities and his creative writing demonstrates his incredible prowess, poise, and reflective thinking.”

“Ed joins a growing cohort of award-winning Aberystwyth Creative Writing students whose successes demonstrate the quality, originality, and glittering brilliance of their writing across a broad range of genres and forms. We wish Ed every success for his future and heartily congratulate him on this prestigious award.”

Second place was awarded to Alex Diggins from Bristol for Sea Change: An Argument in Six Parts, and third to Nicholas Murray from Presteigne for Writing and Engagement.

All three shortlisted entries will be published in extract form in the autumn issue of New Welsh Reader 118 to be published on 1 September 2018.

Ed Garland
Ed Garland is a part-time student on the MA in Creative Writing at Aberystwyth University.

His writing has appeared in Antic magazine, A Glimpse Of, and various collaborations with the illustrator Inkymole.

He is from Greater Manchester, and lived in Leicester and Bristol before moving to Aberystwyth with his wife, Helena, in 2016.

He was awarded a BSc in Music Technology from DeMontfort University in 2005.

He works as a copywriter and has worked as a court clerk, a climbing instructor, a poster seller, and many other things.

New Welsh Review
New Welsh Review was founded in 1988 as the successor to The Welsh Review (1939- 1948), Dock Leaves and The Anglo-Welsh Review (1949-1987) and is Wales’s foremost literary magazine in English, offering a vital outlet for the very best new fiction, creative non-fiction and poetry, a forum for critical debate, and a rigorous and engaged reviewing culture.

New Welsh Review Ltd is supported through core funding by the Welsh Books Council and hosted by Aberystwyth University Department of English and Creative Writing. The magazine’s creative content was rebranded as New Welsh Reader in 2015, with reviews moving entirely online.

Department of English and Creative Writing