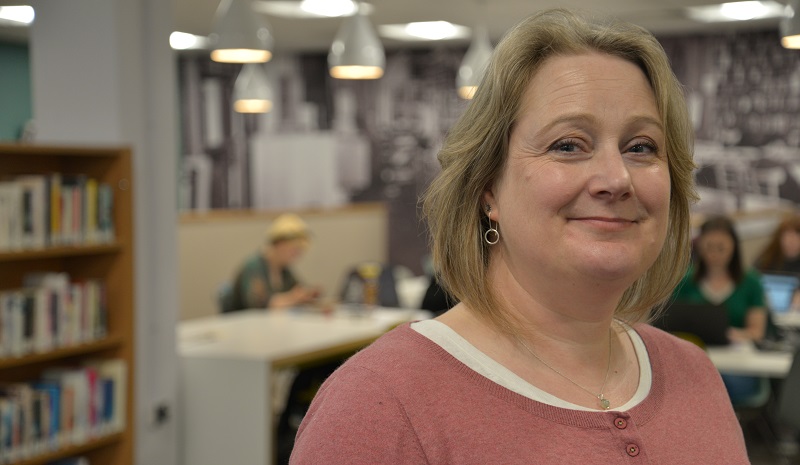 Dr Sian Nicholas from the Department of History and Welsh History

Love letters of an Aberystwyth University student and her soldier boyfriend are set to form part of a major study into the impact of The Great War on the people and communities of Aberystwyth.

The privately-owned letters tell of the friendship and growing love of ‘Billy and Dot’, as they share their thoughts on books, art, films and ideas, banter and argue, and describe their wartime experiences to each other.

The letters are set to be dramatised as part of the 'Aberystwyth at War: Experience, Impact, Legacy, 1914-1919' project which has secured financial backing from the Heritage Lottery Fund.

Dot, a student at the then University College of Wales, Aberystwyth, abandoned her studies to work as a Voluntary Aid Attachment nurse.

Billy trained in Aberystwyth before being deployed to the Western Front and died in action 1917. Dot remained single for the rest of her life.

The 18 month project is led by Dr Sian Nicholas from the Department of History and Welsh History at Aberystwyth University.

Dr Nicholas has researched extensively on war-time Britain, and particularly on the history of the British media during conflicts.

This study will explore the effects of the conflict through the eyes of student volunteers, local community history societies and performance groups, schools and local residents.

Using wartime records, letters, newspapers, photographs, refugee art and music, war memorials and recorded memories in local archives the project hopes to piece together the stories of those who were affected in the form of an interactive map.

Sources will include the National Library of Wales, Ceredigion Archives, Ceredigion Museum, Aberystwyth University’s own archives, and public places.

Project leader Dr Sian Nicholas said: “We are delighted to have been awarded funding by the Heritage Lottery Fund for this project. While some stories have been told, many others are incomplete or unexplored. We hope to go some way to addressing this and to introduce a whole new generation of people to the losses and hardship experienced by those who went to war as well as those left behind during WW1.”

The project will also offer opportunities for local groups to interpret the influences of WW1 through art and performance, and develop archival, digital and creative skills as they identify and follow the wartime histories of Aberystwyth.

It will span the stories of the soldiers and their loved ones, refugees, university students and staff, political activists and conscientious objectors.

Plans for the project include staging performances, creating an open access interactive digital map featuring biographies and video material, and the establishment of community legacy for future discovery and interpretation.

Project partners are the Department of History and Welsh History and Aberystwyth Arts Centre, both part of Aberystwyth University, Ceredigion Museum, Ceredigion Archives, People's Collection Wales based at the National Library of Wales, community theatre groups and local heritage groups.

The screenings form part of Ceredigion Museum’s Hope in the Great War exhibition which opens on 5 May 2018.

Department of History and Welsh History