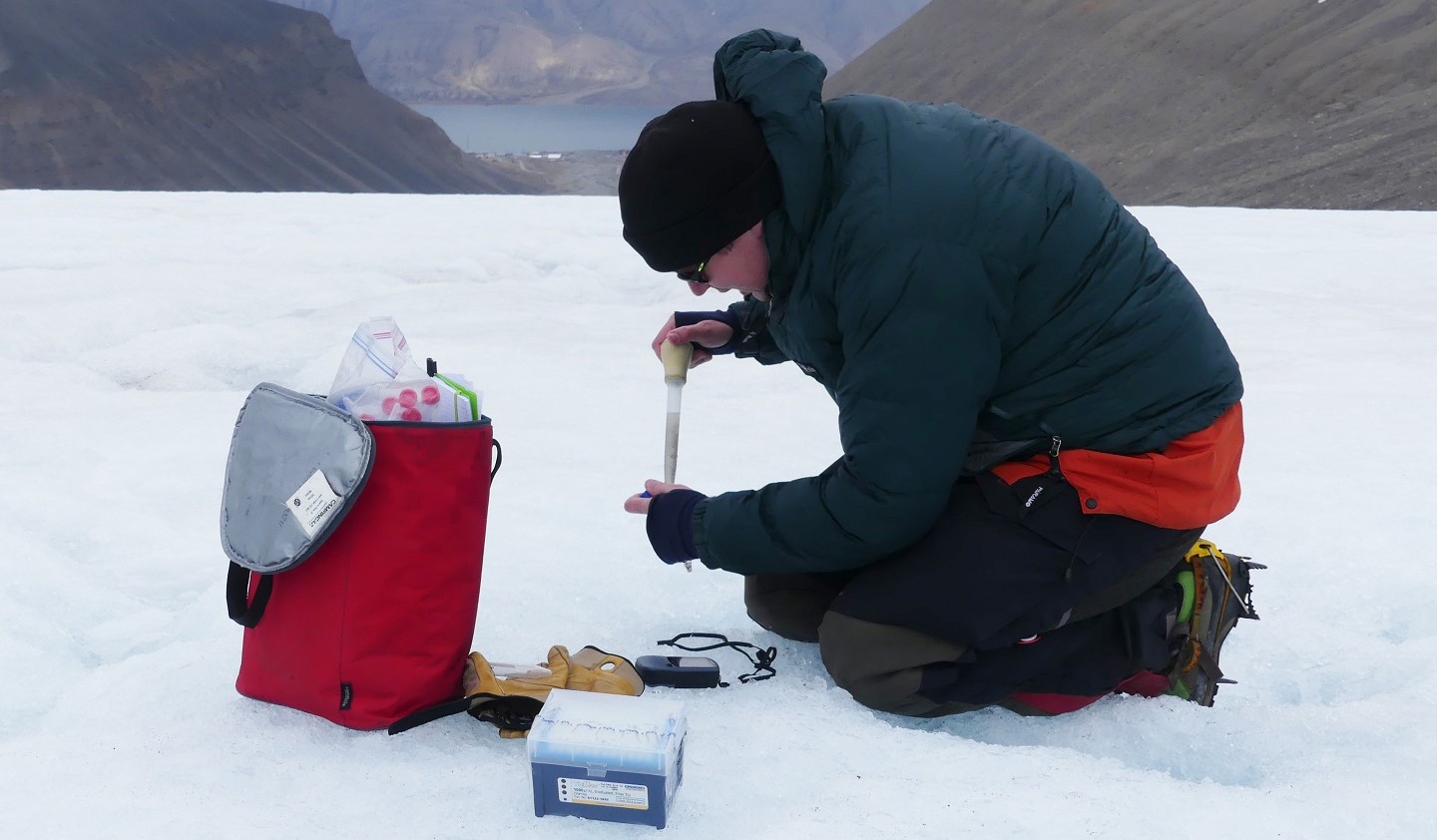 Findings by an international team of scientists studying life on the surface of glaciers in the Arctic and Alps are changing our understanding of how viruses develop.

Dr Arwyn Edwards from Aberystwyth University, together with colleagues from the Universities of Innsbruck, Bristol, Reading, Minnesota in the USA, and Aarhus in Denmark, sequenced and compared genomes (their total DNA) of viruses which infect microbes found on the surface of glaciers.

The viruses studied by the research team originate in very unusual habitats on the surface of glaciers and ice sheets, called cryoconite holes. These small pools of meltwater on glaciers are ideal places to test how viruses evolve because they are miniature, replicated communities of microbes which are found on widely separated glaciers around the world.

“Viruses play a central role in the natural world. Understanding their evolution allows us to predict their role in the environment and how they interact with their hosts.

“We often associate viruses with human diseases, something brought into sharp focus by the current COVID-19 pandemic. However, viruses are the most abundant life forms on Earth, with millions in every drop of ice or water. We think they can infect all living organisms and most are harmless to humans, instead infecting microorganisms. In many cases, nutrients leaking from the infected cells as they die help sustain entire ecosystems.”

It is known from laboratory studies that viruses evolve rapidly in order to keep up with their hosts, which are also simultaneously evolving defenses against virus infection, this evolutionary arms race means that they should remain in balance relative to each other. This is known as the 'Red Queen' hypothesis after the character from Alice in Wonderland who states: It takes all the running you can do, to keep in the same place.

“Current thinking suggests that that when we sequence the genomes of viruses from distant places, we should never find exactly the same virus genomes twice. So, when we looked at the virus genomes from isolated cryoconite holes, thousands of kilometres apart, we expected to find that they would each contain different viruses only distantly related to one another. However, we actually found that most bacterial infecting viruses were nearly identical between the Arctic and the Alps. This tells us the "arms race" between a virus and its host's defences is more important than geography in shaping the populations of viruses.”

When the research team looked closer at their stable genomes, they saw that there were many small sections in each genome where DNA from other related viruses was repeatedly swapped in and out, in a known process called recombination. In each different location, the viruses shuffled the genes present in these swappable regions like a kind of genetic fruit machine.

“This means that in the natural environment, gene swapping between viruses by recombination creates much diversity in the virus population, specifically in genes which are involved in recognising and attaching to different hosts, this probably gives viruses the potential to quickly adapt to different hosts in the environment.”, according to the study’s lead author, Dr Chris Bellas of Innsbruck University.

Speaking about his views on the wider threats to the Arctic of climate change, Dr Arwyn Edwards added:

"These viruses we are studying in the Artic are harmless to humans. But, as the Arctic is warming, what we're seeing is increased accessibility to the Arctic and a lot more people touring in the Arctic. The impacts of climate change and global travel mean that we're now threatening small, vulnerable communities in the Arctic with diseases from elsewhere."