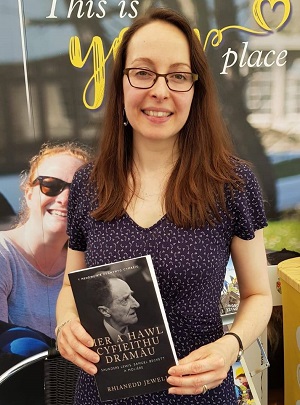 A lecturer in Professional Welsh at Aberystwyth University has been reocgnised for her study of the translation work of one of Wales’ most celebrated dramatists, novelist and authors, Saunders Lewis.

The Award is presented annually from the Ellis Griffith Fund in the name of the University of Wales for the best work in Welsh on Welsh authors or their work, Welsh artists and artisans or their work.

The Prize is provided from a Fund raised mainly in Anglesey and London to perpetuate the memory of the late Right Honourable Sir Ellis Jones Ellis Griffith MA KC PC (1860-1926), a former Member of Parliament representing the County of Anglesey.

Past winners include Professor D Densil Morgan for his work on Lewis Edwards, Wales’s foremost scholar on the nineteenth century; Rhiannon Marks for her insight into the work of Menna Elfyn, and Emeritus Professor Ceri W Lewis on his work on poet and antiquarian Iolo Morgannwg.

His translations of the works of French playwrights Samuel Beckett and Molière reveal a new aspect of the writer, known mainly as a playwright, novelist and politician rather than a translator.

The history of translation and adaptation in Welsh theatre is considered and the way that they have made an important contribution to the development of Welsh drama; the importance of Europe, especially France, to Saunders is also looked at and the significance of this as a basis to his translation work.

The way in which his translation methods reflect his personal and professional development over a period of forty years is discussed, and the role the translator plays in the world of the theatre – the question of what right a translator has to adapt a piece of literature, for example, and the boundary between translating, adapting, and creating a new text, and to what degree the new translation has genuine artistic value in itself.

Dr Dafydd Johnston, Director of the Centre for Advanced Welsh and Celtic Studies, said: “The three judges were unanimous that this rich volume was completely deserving of the prize. This is the first complete study of the translation work of Saunders Lewis, and casts a new light on his development as a writer and on his debt to the French dramatists Samuel Beckett and Moliere. Translation for the theatre is a particular craft, and so the volume is also an important contribution to the field of translation studies in Welsh”.

Rhianedd said:  “It is a special and unexpected honour to receive the Sir Ellis Griffith Prize for my first volume. This project means a great deal to me and therefore I’m extremely grateful to the University of Wales for the recognition of its value and for paying particular attention to the field of translation”.

Rhianedd is originally from Ystrad Mynach near Caerphilly.  She studied French and Italian in St Anne’s College, Oxford University, before progressing to gain an MSt and a DPhil in Italian literature. The focus of her doctorate was the language, identity and narrative of the work of the Sardinian author, Grazia Deledda.

In 2013 Rhianedd won the Saunders Lewis Memorial scholarship, to fund Her a Hawl Cyfieithu Dramâu: Saunders Lewis, Samuel Beckett and Moliere.  In 2016 she also received the Burgen Scholarship by Academia Europea for this work.

In May this year she won the Dillwyn Medal for the Creative Arts and Humanities by the Learned Society of Wales for her research work into the field of translation studies.