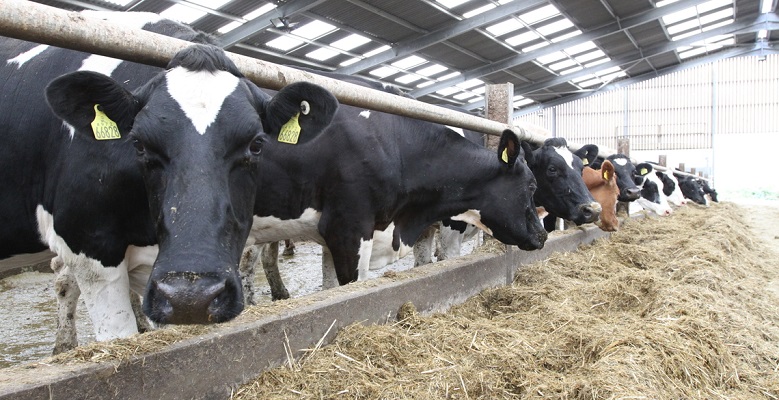 Writing in The Conversation, Dr Andreas Foskolos and Dr Jon Moorby from the institute of Biological, Environmental and Rural Sciences (IBERS) discuss How climate change will affect dairy cows and milk production in the UK.

The unusually hot summer of 2018 has proved challenging for farmers across the UK. Among other things, the scorching weather and lack of rain has damaged crops, and the grass used to feed farm animals too.

Unfortunately the unusual may become more usual as the effects of climate change are felt more frequently across the world. The high ambient temperatures and humidity seen this year, as well as extreme weather conditions such as flooding, are a significant challenge to the future of farming.

Pasture-based systems of dairy production, which are very common in the UK, are particularly sensitive to environmental factors. In fact, dairy cows are more likely to be vulnerable to the effects of climate change than cows that are housed, because housing provides shelter and technological options to mitigate the extremes of weather.

For our recent study, our team looked at how climate change might impact UK milk production, given what we already knew about how it affects dairy cows. In particular, we wanted to quantify the effects of heat stress on milk production.

Heat stress in cows occurs when ambient temperature and humidity go above animal specific thresholds. These thresholds are estimated by the temperature humidity index (THI). At present, the current British temperature and humidity is considered moderate on this scale, but is expected to get worse. It is open to debate, and depends on the cattle themselves, but generally a THI of more than 70 is regarded to be the point when heat stress becomes a problem and less milk is produced.

Using 11 different climate projection models, and 18 different milk production models, we estimated potential milk loss from UK dairy cows as climate conditions change during the 21st century. Given this information, our final climate projection analysis suggests that average ambient temperatures in the UK will increase by up to about 3.5℃ by the end of the century. This means that THIs during the summer, in some parts of the country, will lead to significant heat stress for cows if nothing is done to alleviate the hot weather’s effects.

Lactating cows initially respond to mild heat stress by sweating, panting, drinking more, and seeking shade when possible. At higher temperatures cows eat less feed, which leads to a fall in milk production. In south-east England – the region with the highest incidence of heat stress – the average annual milk losses due to heat stress is projected to exceed 170kg/cow. Cows in the UK currently produce an average of about 7,500kg of milk each year so these future losses would be about 2.4% of their production.

However, climate change projections also suggest the UK would experience more heatwaves, and these would lead to even greater losses of milk. For example, the hottest area (south-east England) in the hottest year in the 2090s is predicted to result in an annual milk loss exceeding 1,300kg/cow, which is about 18.6% of annual milk yield.

In economic terms, south-west England is expected to be the region most vulnerable to climate change because it is characterised by a high dairy herd density, and so potentially a high level of heat stress-related milk loss. In the absence of mitigation measures, the estimated heat stress-related annual income loss for this region by the end of this century may reach £13.4m in average years, and £33.8m in extreme years.

However, by the end of the century we predict dairy cattle in large portions of Scotland and Northern Ireland could experience the same level of heat stress as cattle in southern England today.

These predictions assume that nothing is done to mitigate the problems of heat stress. But there are many parts of the world that are already much hotter than the UK where milk is produced, and much is known about what can be done to protect the welfare of the animals and minimise economic losses from heat stress. These range from simple adaptations, such as the providing shade, to installing fans and water misting systems.

Cattle breeding for increased heat tolerance is another potential, which could be beneficial for maintaining pasture-based systems. In addition, changing the location of farming operations is another practice used to address economic challenges worldwide. Even though there is little indication that movement of dairy farming operations is a feasible strategy to decrease the risks of environmental challenges in the UK, regions with little or no prediction of conditions leading to heat stress (for example some parts of Scotland) may become increasingly important for UK dairy farms that depend on the availability of pasture.

In any case, we estimate that by 2100, heat stress-related annual income losses of average size dairy farms in the most affected regions may vary between £2,000-£6,000 and £6,000-£14,000 (in today’s value), in average and extreme years respectively. Armed with these figures, farmers need to begin planning for a hotter UK using cheaper, longer-term options such as planting trees or installing shaded areas.