Liberia’s largest palm oil producer pulls out of sustainability roundtable – what does this mean for rural communities? 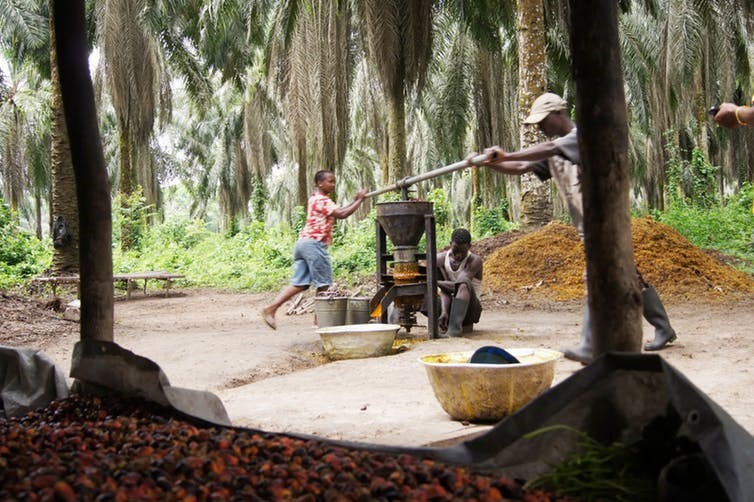 Palm oil being made by local workers in Liberia. Wikimedia/Panoramio, CC BY-SA

Writing in The Conversation, Fidel C T Budy from the Department of Geography and Earth Sciences, discusses how Liberia's rural communities have long been suffering land grabs by international palm oil producers:

The palm oil industry is no stranger to controversy. While the world has come to learn of the environmental issues linked to the oil’s production, claims have arisen that countless rural communities have been affected by land grabs by companies seeking to expand their production.

That began to change in 2001, however, when World Wildlife Fund started to explore setting up a Roundtable on Sustainable Palm Oil (RPSO). By 2004, the roundtable had been formally established as a not for profit group, bringing together several types of industry stakeholder, including civil society organisations (CSOs) to represent the interests of rural communities on whose land large companies are growing oil palm. All members now work together to agree and develop a set of environmental and social criteria, and achieve a sustainable palm oil certification.

As of May 2018, 3.57m hectares of land had been certified under the scheme, and the 3,920 members produced 19% of global palm oil (12.2m tonnes). While global data on the impact of RSPO certification on land grabbing episodes are hard to find, a 2018 report suggested that it had contributed to a 33% reduction in deforestation between 2001 and 2015 in Indonesia alone.

However, these stats are now set to change following palm oil giant Golden Veroleum Liberia’s (GVL) withdrawal from the RSPO. The Singapore-based developer is one of Liberia’s largest investors who, according to its RSPO profile, is “committed to the sustainable development of palm oil in Liberia. This means protecting the environment and working harmoniously with local communities”.

GVL’s leaving was triggered by the RSPO’s decision to sanction several member organisations – including GVL – who had been accused of violating the body’s key principle of free prior informed consent. The main purpose of this is to “ensure that RSPO-certified sustainable palm oil comes from areas without land conflicts or … grabs”.

GVL began operations in Liberia in 2010, amid hopes that it would boost local employment. It was awarded 220,000 hectares of land by the Liberian government for the cultivation of oil palm.

But soon after the company began operations, the people of the Butaw region became concerned that it was clearing sacred sites and protected forests, and encroaching on land without the free prior informed consent of the people. The forests near GVL’s Liberian plantations are also heavily populated with chimpanzees, leopards, pygmy hippopotamus and forest elephants which are significant not only to the local ecosystem but globally.

Complaints were made to the RSPO in October 2012 by several CSOs, which even went so far as accusing GVL of negotiating deals with communities during Liberia’s Ebola outbreak. They argued that communities were desperate for income during the crisis and were easily coerced into signing their land away.

After years of back and forth, RSPO sanctioned GVL in February 2018, ordering the company to stop clearing new lands. A subsequent appeal was rejected and so GVL withdrew.

The problem here is that if it is so easy for a company like GVL to leave the RSPO, what’s to stop others from doing it too? Their leaving could very well be the start of multiple large stakeholders in the palm oil industry going back on their social and environmental agreements.

Numerous CSOs have tested the RSPO’s ability to sanction members over the years, with mixed results. In 2010, a complaint was brought against Sime Darby by the Forest People Programme. This subsequently forced the company to set up a sustainable partnership initiative with local communities affected by land grabs and Liberian environmental groups. The aim was to work together on guidelines for how the company could expand its operations.

However, my own recent conversations with Liberian government officials have revealed that both the company and government felt the RSPO intervention actually harmed the company’s ability to expand. Another case brought against Sime Darby has resulted in the complainant bringing action against the RSPO itself for its failure to make a decision. With such mixed results, it is almost surprising that no members have left the RSPO until now.

GVL has said that its leaving does not represent a “weakening of their commitment” to sustainable palm oil production. And it has even announced its own new sustainability action plan. All good in theory, but the RSPO was there to hold companies to account, and to give the people a way of making sure that global organisations cannot take their land.

Although RSPO membership and adherence to its principles is voluntary, it has been a buffer, stopping large oil palm giants from potentially aligning with corrupt political elites in low income countries. It has stopped – to a certain extent – the erosion of the rights of poverty stricken rural communities, who may have the land beneath their feet taken away, or their local environment destroyed. The fact that any company could get away with a crime they had been accused of without any punishment – even when they held RSPO membership – makes one wonder what they may be able to get away with now that they are not bound by RSPO principles.