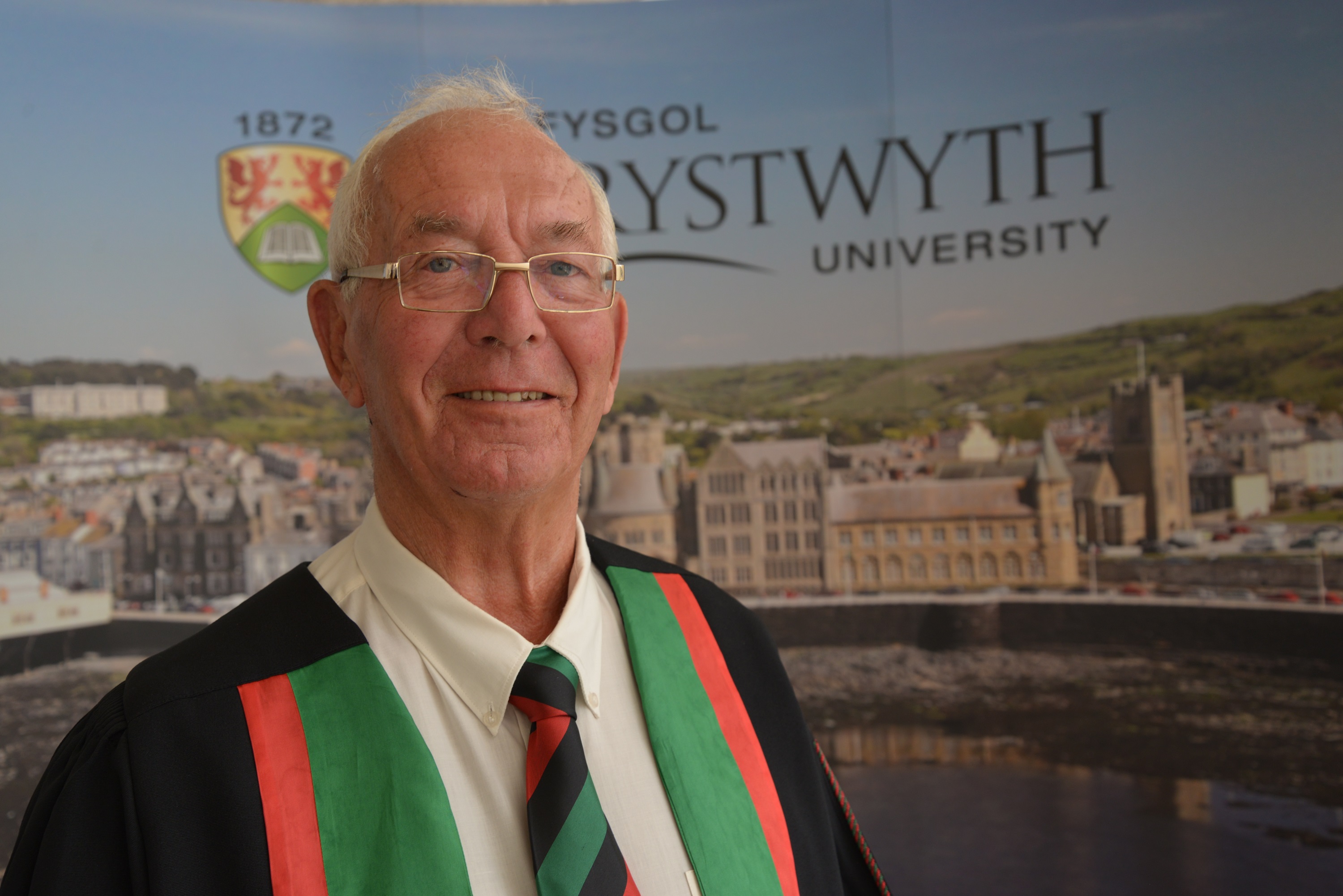 Former Welsh rugby international John Dawes was made an Honorary Fellow of Aberystwyth University during Graduation 2018.

He went on to win a further 21 caps for Wales over the subsequent decade - six as captain, including the Grand Slam winning side of 1971.

After retiring as a player, he was the coach of the Wales national side from 1974-1979, winning the Five Nations Triple Crown four times in five seasons as well as two Grand Slams.

He was made an OBE in the 1972 New Year’s Honours List for services to sport.

John Dawes OBE was presented by Dr Rhys Thatcher from the Institute of Biological, Environmental and Rural Sciences on Wednesday 18 July 2018.  The full conferral presentation is available below, in the language in which it was delivered.

Vice-Chancellor, prospective graduates and supporters.  It is an honour and a privilege to present Sydney John Dawes as a Fellow of Aberystwyth University.

John Dawes enrolled at the University College of Wales, Aberystwyth (as Aberystwyth University was known then) in 1959, graduating three years later with a degree in Chemistry. Following graduation he moved to Loughborough to complete a Post Graduate Certificate in Education. During his university years John managed to balance his studies and playing rugby, achieving success in both.

Following his year at Loughborough College, and at the age of 23, John won his first cap for Wales; the match was against Ireland and the result was a 15-5 win for Wales.  This was the start of an illustrious career resulting in 22 caps for his country including six as captain.

In 1971, John was appointed captain of the British and Irish Lions side for the tour to New Zealand. This side, coached by Carwyn James (a name which is familiar with the sport and exercise science graduands in the audience), became the first and so far the only Lions team to win a series in New Zealand. He also captained the Barbarians side that beat New Zealand in Cardiff, 23-11, in 1973.

Today John holds a proud record for any Welshman; as both a player and a coach he has never lost to an England side.

After retiring as a player, he became coach of the Welsh national side in 1974, a post he held until 1979. During his time as coach, Wales won the Five Nations Triple Crown on four occasions, including two grand slams. In 1977 he returned to New Zealand as coach of the British Lions, unfortunately on this occasion the Lions were unable to repeat their 1971 success.

The list of awards and honours John has received in recognition of his contribution to Rugby is as impressive as his playing and coaching record.

He can now add Fellow of Aberystwyth University to this list.

Vice-Chancellor, it is my absolute pleasure to present Sydney John Dawes to you as a Fellow of Aberystwyth University.

Two Honorary Bachelor degrees will be presented. These are presented to individuals who are members of Aberystwyth University staff without an entry-level degree in recognition of long-service, contribution and dedication to the Institution; and members of the local community who have made a significant contribution to Aberystwyth and the area.

Honorary Fellowships are being presented to: