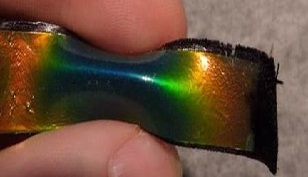 Aberystwyth University is contributing to exciting, new advancements in polymer-based smart materials which could be used in the clothes of the future and other everyday applications.

By stacking microscopic plastic marbles into regular layers, researchers have found that intriguing materials known as “polymer opals” can be produced which scatter light into intense colours creating the same iridescent effect as in opal gemstones, butterfly wings, and beetles.

Dr Chris Finlayson of Aberystwyth University first became involved in this project during his post-doctoral fellowship at the Cavendish Laboratory, Cambridge. Since moving to Aberystwyth in April 2011 to take up his appointment as Lecturer in Physics, he has continued his role as part of the research team which has been developing the material for over a decade.

Dr Finlayson and other members of the team at Cambridge University, headed by Professor Jeremy Baumberg, have now developed a “roll-to-roll” process to make sheets of Polymer Opal material on industrial scales - opening up applications such as smart clothing for people, building coatings and banknote security.

Dr Finlayson says this recent development opens up an array of opportunities: “Such materials had previously been hard to generate artificially using techniques that are cheap enough to allow their widespread use. Our work here helps to finally better understand the secrets of these attractive ‘polymer opal’ films, with all their exciting potential applications."

Fabrication of the flexible photonic films: (a) starting from a powder of sticky polymer core-shell particles, (b) polymer films are extruded in which the particles are ordered by bending-induced oscillatory shear, (c) by changing the sizes of the starting nano-spheres, films of different colours are produced.

Dr Finlayson says that the polymer opals could help in combatting fraud: "The Bank of England has this year announced they will be joining others across the world in the changeover to plastic (polymer) bank notes. In future, we believe that polymer opals could be used as an anti-counterfeit measure on bank notes, and luxury and designer goods to further help in the battle against fraud -  much like a hologram on a passport. The possibilities are endless."

It is thought that these 'chameleon materials' could also find their way into colour-changing wallpapers, sensors and indicators, or building coatings that reflect away infrared thermal radiation.