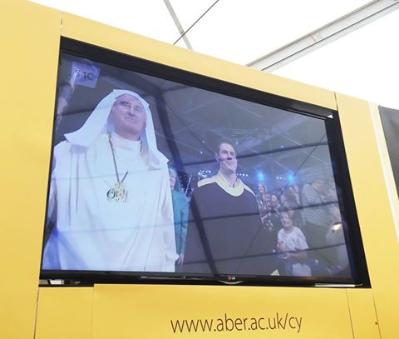 Eurig Salisbury, winner of the Prose Medal at the 2016 National Eisteddfod

Three lecturers from the Department of Welsh and Celtic Studies at Aberystwyth University have been awarded a trio of distinguished prizes.

Eurig Salisbury, who teaches Welsh Literature and Creative Writing at the University, has won the prestigious Prose Medal at the 2016 Monmouthshire and District National Eisteddfod.

The competition this year asked for a volume of prose on the subject of ‘Calling’ and there were a total of fourteen competitors.

The judges were Angharad Dafis, Jane Aaron and Dafydd Morgan Lewis. The coveted medal and prize money were awarded by Ysgol Gyfun Gwynllyw school in Torfaen.

Dr Peadar Ó Muircheartaigh was presented with the Johann Kaspar Zeuss Prize by the Societas Celtologica Europaea and Dr Rhianedd Jewell received the Burgen Scholarship at the Academia Europea conference.

Dr Cathryn Charnell White, Head of the Department of Welsh and Celtic Studies at Aberystwyth University said:“I'm delighted that we are celebrating the success of Eurig Salisbury, Peadar Ó Muircheartaigh and Rhianedd Jewell. The awarding of the Prose Medal is one of the highlights of the National Eisteddfod week and we are very proud of Eurig who joins the roll-call of the Department’s staff to be honoured in one of the festival’s main ceremonies over the years.

“We are equally proud of Peadar and Rhianedd whose prizes are recognition of their research excellence on a European stage, and also confirm the status of Welsh and Celtic Studies as disciplines of international significance.”

The Johann Kaspar Zeuss Prize is awarded by the Societas Celtologica Europaea; a major international society for Celtic Studies scholarship, for the best PhD thesis in Celtic Studies submitted to a European university.

The subject of Peadar’s PhD was, Gaelic Dialects Present and Past: a study of modern and medieval dialect relationships in the Gaelic language. The PhD examined the relationship between modern and medieval Gaelic languages and their dialects. Combining traditional dialectology with quantitative methods and theory taken from historical sociolinguistics, this thesis demonstrated how a better understanding of contemporary linguistic difference can help to answer complex questions of variation in the distant past.

Upon receiving the award, Peadar stated: “The Zuess Prize is an important way of recognising international doctoral research in Celtic Studies; I’m very grateful to the Societas Celtologica Europaea for the award.”

Dr Rhianedd Jewell, a lecturer in Professional Welsh at Aberystwyth University, received the Burgen Scholarship in the annual Academia Europea conference in Cardiff in June.

eld. The Scholarship is named after the founder of Academia Europea, Professor Arnold Burgen and up to ten young Scholars are awarded in the conference each year.

Rhianedd was awarded the prize at the conference this year and was also given an opportunity to present her research. ‌Rhianedd’s work is based on the study of the translation of Saunders Lewis on French dramas created by Samuel Beckett and Molière.

Rhianedd said: “Winning this award is an exceptional privilege and an honour. I’m really pleased that the importance of work in the field of translation studies in Welsh has been acknowledged and I’m grateful to Academia Europea for their support and commendation.”