Presenting astronomy through art at the National Eisteddfod

A unique creative art installation inspired by astronomy is on display at the National Eisteddfod of Wales in Abergavenny.

The creation of North Wales based artists Jessica Lloyd-Jones and Ant Dickinson, ‘Particles’ is a sensory installation of light, colour, optics and sound, which was created to celebrate the Royal Astronomical Society’s 200th Anniversary.

The work is part of a wider project led by Aberystwyth University to present Astronomy and Geophysics through the arts, with the science of the universe viewed through the creative expression of the arts including poetry, music, art, dance and song.

Funded by The Royal Astronomical Society, as part of the Society’s bicentennial celebration, the project is in collaboration with the Urdd National Eisteddfod and the National Eisteddfod of Wales, and involves experts in Astronomy and Geophysics at several institutions.

The unique installation, ‘Particles’, is a creative interpretation of all things astronomical - an immersive projection environment echoing the sublime beauty of the cosmos.

Video projection covers the ceiling and walls, much like a planetarium, but with a large domed mirror in the centre of the room reflecting the entire environment within it, creating a truly magical experience. The moving animation viewed within the optical depth of the mirror is illusionary, as if you could reach in and touch it. The artists want to convey the concept of being sucked into a black hole or the centre of the universe.

Using graphical software, the artists create the effect of explosions of particles moving across and spiralling around the exhibition space. The particles move and are then drawn together again in beautiful collisions, like stars or interstellar dust.

The visual effects are mesmerising, especially when combined with the subtle colours that remind us of the aurora, galaxies and planetary nebulae.

The piece also incorporates NASA footage of the Sun, adding a glorious warm glow to the space, along with an ambient soundscape composed from NASA sound recordings.

Artist Jessica Lloyd-Jones said: “We wanted to create an environment that is hypnotic and meditative; encouraging the viewer to contemplate life and existence or just simply be immersed within what they see, hear and feel; detached from the world as we most commonly know it.  The patterns you see are intended to be evocative of celestial occurrences and the beauty and wonder we find within them.”

Professor Eleri Pryse, Physicist at Aberystwyth University commented: “Aberystwyth University has a long history of expertise in planetary and space science.  It was a pleasure to discuss the wonders of the aurora, sun and space with Jessica and then see her artistic interpretation of astronomy, where the artists have succeeded in capturing the imagination of people of all backgrounds and ages. By exhibiting the installation at the Urdd Eisteddfod in May, and now at the National Eisteddfod, the work reaches out to new audiences that may not otherwise engage in science.”

‘Particles’ is on display at stand 526 at the Monmouthshire and District National Eisteddfod of Wales on Castle Meadows in Abergavenny from 30 July – 6 August. 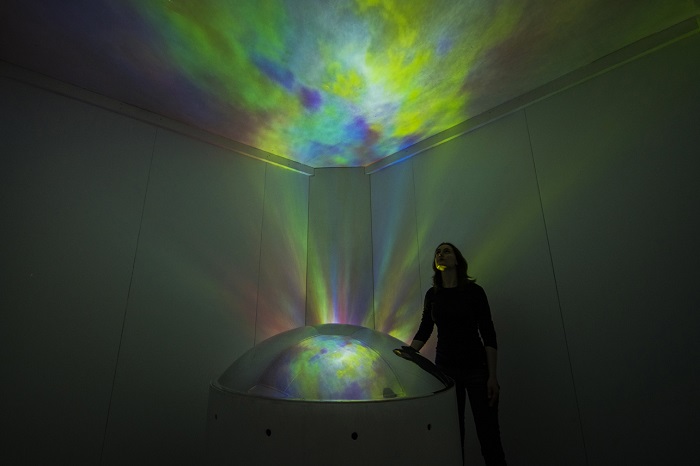 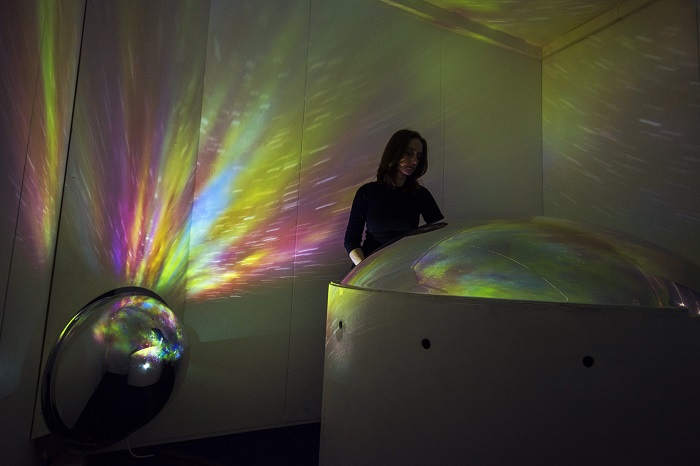