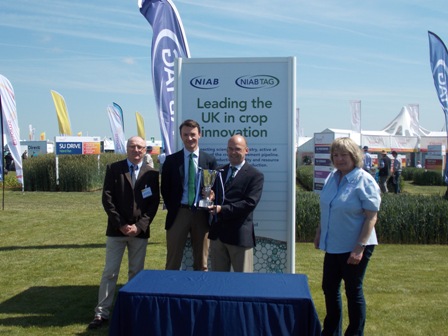 AberGreen first entered the industry’s independent Recommended List in 2011. It is only the second forage variety ever to be recognised with the award of the NIAB Variety Cup, following on from the award made to the Aberystwyth team’s first Aber High Sugar Grass, Aber Dart in 2003.

Professor Mike Gooding, Director of IBERS on accepting the Award at CEREALS 2015 event in Lincolnshire said “I am honoured to receive this Award on behalf of the grass breeding team at IBERS. This Award is significant in that it builds on the distinguished heritage of crop improvement at Aberystwyth lasting nearly 100 years. AberGreen demonstrates our continued commitment to combining leading agricultural performance with improved environmental sustainability: an essential combination to deliver resilient farm businesses and food security"

Breeding programmes initiated in the Institute (then IGER) in the mid 1980’s increased average water soluble carbohydrate (WSC) to 23% in the variety AberDart released in 1999. This variety was awarded the NIAB Variety Cup in 2003 in recognition of its improved quality combined with excellent agronomic performance.

Professor Athole Marshall Head of Plant Breeding at IBERS said “We are delighted to receive the NIAB Variety Cup for the second time, in recognition of the dedication and passion of the talented, world recognised team of grass breeders at IBERS. AberGreen perfectly illustrates our aim of breeding varieties not only for their excellent combination of yield, quality and ground cover but also for traits such as water soluble carbohydrate content which delivers both improved animal performance and environmental benefits.”

Outstanding dry-matter yield combined with exceptional D-value make the intermediate diploid AberGreen one of the very highest ranked perennial ryegrasses for total Metabolisable Energy (ME) yield. It is also a top performer for ground cover and scores very highly for disease resistance.

Bred at IBERS Aberystwyth University, AberGreen is one of the latest-developed Aber High Sugar Grass varieties. With its higher water soluble carbohydrate content but without a proportional increase in protein, this variety exhibits what breeders describe as close to the optimum forage protein-to-energy balance for efficient livestock production.

“Ruminant animals are poor converters of grass protein into meat and milk,” explains IBERS grass breeder Alan Lovatt. “This is largely due to the imbalance between readily available energy and protein within grass. In a grazing context this commonly results in only around 20% of the protein from herbage actually being used for production. The rest is excreted, which is financially costly for the farmer and problematic for the environment as nitrogenous waste converts to greenhouse gases.

“There are therefore real benefits in providing a better protein-to-energy balance in grass, and this is exemplified more than ever before in AberGreen. With the higher water soluble carbohydrate in the grass providing more readily available energy in the rumen, more of the nitrogen released from the breakdown of protein is used by the rumen microbes for the production of meat and milk, and less is excreted as greenhouse gases.”