Glaciers in northern Antarctic Peninsula melting faster than ever 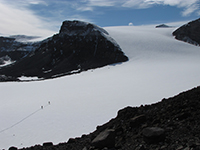 Increased snowfall will not prevent the continued melting of glaciers in the northern Antarctic Peninsula, according to new research published today (Sunday 14 September) in the journal Nature Climate Change.

An international team of researchers, which includes Professor Neil Glasser from Aberystwyth University, has discovered that small glaciers that end on land around the Antarctic Peninsula are highly vulnerable to slight changes in air temperature and may be at risk of disappearing within 200 years.

Temperatures are currently rising rapidly in the Antarctic Peninsula. Because warmer air holds more moisture, the amount of snowfall has also increased. Some researchers have suggested that this may offset the melting of the glaciers in the future. However, this study found that even small increases in air temperature increased melting so much that even large amounts of extra snowfall could not prevent glacier recession.

“These small glaciers around the edge of the Antarctic Peninsula are likely to contribute most to rising sea levels over the coming decades, because they can respond quickly to climate change”, said Dr Bethan Davies, from Royal Holloway, University of London, who led the research.

“This study is the first to show how glaciers in this vulnerable region are likely to respond to climate change in future. Our findings demonstrate that the melting will increase greatly even with a slight rise in temperature, offsetting any benefits from increased snowfall.”

The researchers used a combination of glacier and climate modelling, glacial geology and ice-core data. They carried out extensive fieldwork on James Ross Island, northern Antarctic Peninsula, to map and analyse the changes to a glacier, which is currently 4km long, over the past 10,000 years.

Dr Davies added: “Geological evidence from previous studies suggests that the glacier grew by 10km within the last 5,000 years, before shrinking back to its current position.  It was argued that this occurred during a warmer but wetter period, suggesting that increased precipitation in the future would offset glacier melt. However, our study shows that this growth actually occurred during the colder ‘Little Ice Age’, reaching its largest size just 300 years ago.”

Professor Neil Glasser said: “We found that this glacier remained roughly the same size for thousands of years during the Holocene period, until it started to grow again 1,500 years ago. However, it is now melting faster than anything seen before, and over the next 200 years will become far smaller than at any point over the last 10,000 years.

“This unprecedented glacier recession, in response to climate change, will result in significant contributions to sea level rise from this and similar Antarctic Peninsula mountain glaciers and ice caps.”

Researcher Dr Nicholas Golledge, from Victoria University of Wellington, in New Zealand, added, “This glacier, though small, is typical of many of the small glaciers that end on land around the Antarctic Peninsula.  This research is important, because it helps reduce some of the uncertainties about how these glaciers will react to changing temperature and precipitation over the next two centuries.”

More information can be found on the Nature Climate Change website: http://www.nature.com/nclimate/index.html