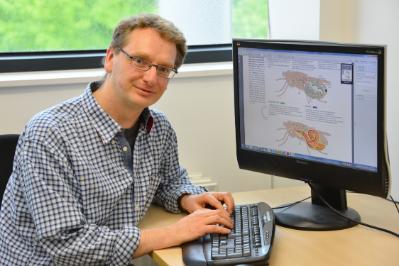 Dr Martin Swain of Aberystwyth University’s Institute of Biological, Environmental and Rural Sciences (IBERS), is one of the authors of a paper published today in the prestigious journal Science on the completion of the genetic code of the Tsetse fly.

The paper, “Genome Sequence of the Tsetse Fly (Glossina morsitans): Vector of African Trypanosomiasis”, is available online at http://www.sciencemag.org/lookup/doi/10.1126/science.1249656

Tsetse flies function as the insect carriers of African trypanosomes - parasites - to humans and animals in sub-Saharan Africa. Human African trypanosomiasis or sleeping sickness is a widespread tropical disease that can be fatal if not treated. It is spread by the bite of an infected tsetse fly hosting a small parasite that leads to a serious infection in the brain and the meninges (the covering of the brain and spinal cord).

The World Health Organisation (WHO) estimates that the disease threatens 70 million people in the poorest underdeveloped countries in the world. In the last 30 years, increasing poverty and a decreasing number of surveillance programmes have had undesirable consequences, and epidemics have been seen both in known endemic areas and in areas where it had been thought that the fly and parasite had been eradicated.

Dr Martin Swain said; “The information contained within the genome provides a foundational resource which will be invaluable to the tsetse and insect vector (carrier) biology communities. Access to this information will accelerate research on tsetse’s basic biology. The outcomes of this research can then be applied to improving current tsetse control methods and the development of new strategies with an emphasis upon improving effectiveness and cost reduction.”

Detection and treatment of trypanosomiasis is expensive, difficult and dangerous. Disease prevention by vaccine development does not appear feasible due to the ability of trypanosomes to evade the mammalian immune system. Currently, African trypanosomiasis is controlled primarily by vector (tsetse fly) control through techniques such as trapping, pesticide treatments and sterile male release strategies.

Beyond disease control, the genome is an important resource for evolutionary biology. Tsetse flies are unique from the majority of other insects in multiple aspects of their biology.

Dr Swain is one of over 140 scientists specialising in a wide array of topics important to understanding the biology of the tsetse fly that came together to examine olfaction (smell), gustation (taste), vision, reproduction, digestion, blood feeding, immunity, metabolism, stress response, symbiotic relationships between tsetse and its associated microbial entities, and the hormonal regulation of genes and physiological functions.

The analyses performed by these research groups were used to update the automated predictions and add information to the gene predictions in the database. The process of annotation is ongoing and information will be continually added to this resource over time.

They provide examples of dramatic physiological adaptations and the evolution of these amazing adaptations can now be examined on a genomic level relative to other related insects (such as the fruit fly Drosophila) for which genomic information is also available. Dr. Swain said

“Insights gained from such comparisons allow us to understand how such dramatic changes develop at the genetic level in related organisms.”

Since the project was initiated on a shoe-string, it was a challenge to keep the consortium together and to raise funds for the project and associated activities.  The older methods were much more expensive than the new approaches used now. Newer technologies facilitated the completion of the genome.