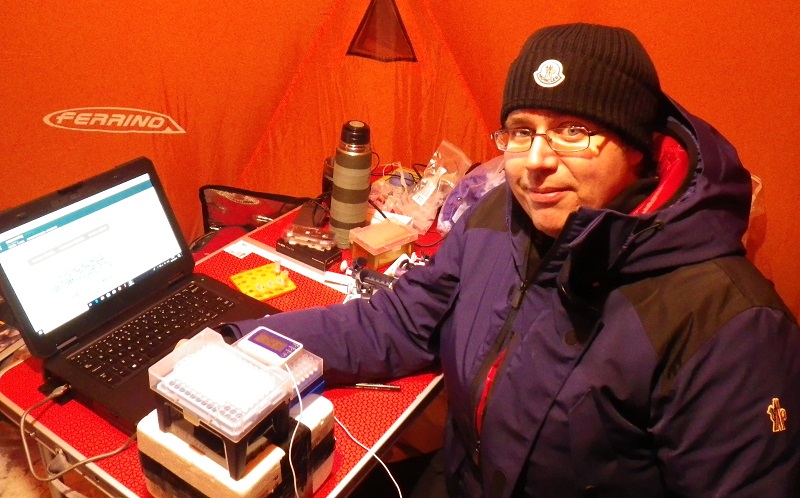 Dr Arwyn Edwards has developed a portable DNA sequencing laboratory that fits into a small rucksack and can be used anywhere in the world.

A climate scientist from Aberystwyth University is set to feature in a series of BBC Radio 4 broadcasts from the Norwegian archipelago of Svalbard this week.

Dr Edwards, Senior Lecturer and Director of the Interdisciplinary Centre for Environmental Microbiology, will appear on Today as part of a series of broadcasts between 6 and 9am on Wednesday 13 and Thursday 14 March.

Dr Edwards has led over 24 deployments to polar and alpine regions, with 14 of those to Svalbard.

His research interests focus upon understanding the interactions between microbes and glaciers by using state-of-the-art genomic analyses in the lab and field.

Working with Oxford Nanopore he has developed a portable DNA sequencing laboratory that fits into a small rucksack and can be used anywhere in the world.

As part of the broadcast, Dr Edwards will be testing to see whether microbes overwinter on glacier surfaces.

This will be second time Dr Edwards has featured on BBC Radio 4’s Today programme.

Last year, during a live broadcast of Today from Aberystwyth University, Dr Edwards and colleagues sequenced DNA live on air.

Dr Edwards also featured in the 2018 Royal Institution Christmas Lectures, with biological anthropologist, author and broadcaster, Professor Alice Roberts, and genetics expert Professor Aoife McLysaght, as they addressed the most fundamental of questions, “Who am I?”.