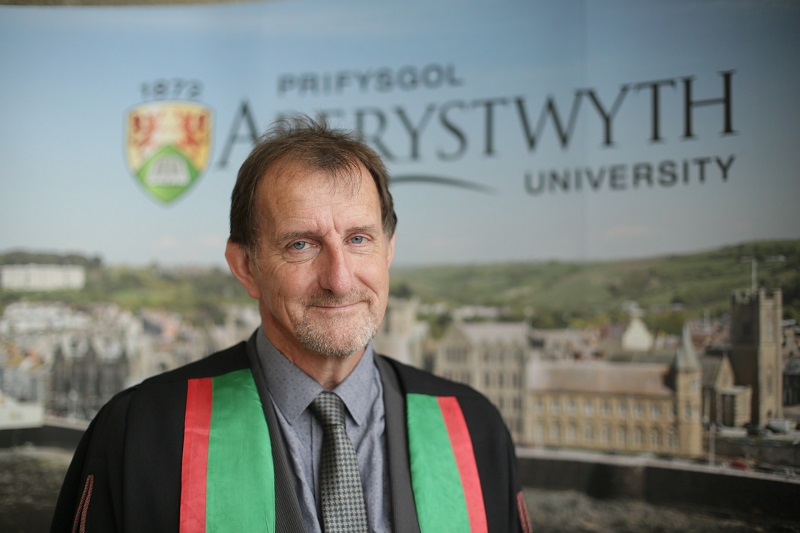 Alan Lovatt, Senior Grass Breeder in the Institute of Biological, Environmental and Rural Sciences (IBERS) at Aberystwyth University, has been awarded an Honorary Degree in recognition of long-service, contribution and dedication to the University.

Alan has been a grass breeder for all his working life, firstly for the Welsh Plant Breeding Station (then part of University College of Wales Aberystwyth), then the Institute for Grassland and Environmental Research, and now for IBERS.

He has been the convenor of the British Society of Plant Breeder’s forage section. He has, most notably, been highly involved in the multi-award winning high sugar grass breeding programme at IGER/IBERS.

Alan Lovatt was presented by Professor Athole Marshall from the Institute of Biological, Environmental and Rural Sciences at Aberystwyth University on Wednesday 19 July 2017.

Chancellor, Vice-Chancellor, prospective graduates and supporters.  It is an honour and a privilege to present Alan Lovatt for an Honorary Bachelor of Science Degree of Aberystwyth University.

Alan, Senior Grass Breeder at IBERS, joined the Grass Breeding Department of the Welsh Plant Breeding Station of the University College, Wales, Aberystwyth on October 1st 1974. For more than 40 years, Alan has played a significant role in the success of the Aberystwyth grass breeding programme and its transformation from a largely academic focused programme to the present day success where modern technologies are combined with conventional breeding to produce commercially successful varieties that are marketed across the UK and in more than 20 other countries across the world.

Alan spent his early career working on Italian ryegrass, producing the varieties Tribune, Trajan and AberComo then breeding tetraploid perennial ryegrass varieties such as AberGlyn and AberGain.  He has most notably been involved in the multi-award winning high sugar grass breeding programme. The first award was in 2003 when the Aber High Sugar Grass AberDart became the only grass variety to date to win the NIAB variety cup. A further six major awards have subsequently followed,  including “The Queens Anniversary prize 2009” and the 2013 Times Higher Education Awards for Outstanding Contribution to Innovation and Technology.

Alan has had a central role in the integration of new technological advances that are an important component of modern plant breeding. He has championed the application of high throughput phenotyping in the evaluation of yield and forage quality and his role in these developments has been pivotal in enhancing the worldwide reputation of Aberystwyth as a centre of excellence of plant breeding and genetics and of “Aber” as a recognisable description of scientific excellence.

Alan is a born communicator equally adept at talking with farmers, seed merchants, plant breeders and academics. His passion for the Welsh culture and language means he is regularly called upon to take part in TV and radio interviews through the medium of Welsh, primarily on forage breeding but also more widely on plant breeding and genetics and increasingly in wider areas of science. It is testament to his willingness and ability to engage with the public that I have never known him to refuse such requests, even when he has other pressing matters on his time.

Alan’s extensive knowledge and expertise is widely sought after by his peers not only in Aberystwyth but in other parts of the world. He has been the convenor of the British Society of Plant Breeders, forage section where his knowledge of forage plant breeding is utilised to ensure that only the best varieties are available to UK farmers.

Chancellor, it is my absolute pleasure to present Alan Lovatt to you for an Honorary Bachelor of Science Degree.

Eight individuals are being honoured by Aberystwyth University during the 2017 graduation ceremonies, which take place at the University’s Arts Centre from Tuesday 18 July until Friday 21 July.

Gareth Howell, an Aberystwyth law graduate who has shown innovative leadership in devising practical solutions to problems in countries facing extreme transitions in their national life.