Climate change – the threat to life in Welsh waters

Research by a scientist from Aberystwyth shows that marine life off the coast of Wales will need to react as quickly as wildlife on land to combat the effects of climate change.﻿

It also shows that climate warming is already having an effect in Welsh waters and animals and plants are already moving.
The research challenges previous thinking that marine life in the ocean will respond more gradually than on land because of slower warming in the oceans.

According to the new research published today in Science, some marine life may need to relocate faster than land species as well as speed up the timing of major life cycle events.

The paper’s co-author is Dr Pippa Moore a lecturer in Aquatic Biology at IBERS, the Institute of Biological, Environmental and Rural Sciences at Aberystwyth University.

“Analyses of global temperature found that the rate at which marine life needs to relocate in the ocean is as fast, or in some places faster, than for land species,” she says. “This is despite warming of the ocean being three times slower than on the land.”

"Springtime temperatures in April have arrived around five days per decade earlier around the Welsh coastline and average annual temperatures have been moving rapidly northwards at 5-10 km/decade,” she explained.

“Animals and plants found along the Welsh coastline are tracking these changes with species shifting their ranges towards the poles and experiencing earlier onset of reproduction." 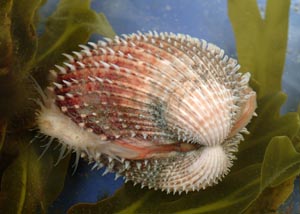 Lead author, Dr. Mike Burrows of the Scottish Association of Marine Science, said the rate that marine life will need to move is faster because they may have to travel further to stay within their preferred temperature conditions.

The study also identified that patterns of climate change are not uniform, with regions warming and some even cooling at different rates.

Dr Moore said, “With climate change we often assume that populations simply need to move poleward to escape warming, but our study shows that this is more complex in the ocean.

“For example, some marine life will need to move eastwards along the UK coastline to remain in their preferred environment.”

Dr Burrows added “Some of the areas where organisms would need to relocate the fastest to stay ahead of climate change are important biodiversity hot spots such as the coral triangle region in Southeastern Asia.”
The study was performed and supported in part by the NSF funded National Center for Ecological Analysis and Synthesis in Santa Barbara, USA.

Dr. Pippa Moore is a marine climate change ecologist and an Lecturer in the Institute of Biological, Environmental and Rural Science at Aberystwyth University.