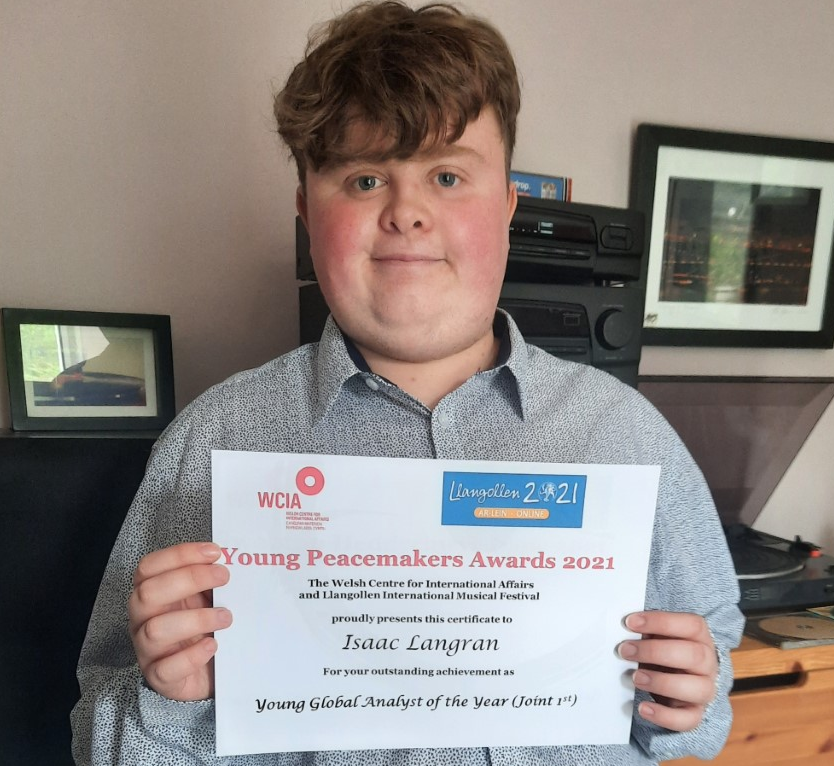 A final year International Politics student at Aberystwyth University has been presented with a Young Peacemakers Award for a written composition on the Israel-Palestine peace process.

Isaac Langran, who has been studying at Aberystwyth University for three years, was awarded joint first place in the Young Global Analyst category for his interesting and original proposal for peace.

Now in their sixth year, the Wales Young Peacemakers Awards which are presented by the Welsh Centre for International Affairs, celebrate young people who have contributed to peace and global citizenship in a variety of ways.

This year’s Young Global Analyst of the Year category invited children and young people to submit a creative piece of writing, art, or digital media to express their ideas about how the world can be a more peaceful, equitable and sustainable place post-COVID19.

Dr Patrick Finney, Head of the Department of International Politics at Aberystwyth University said: “Winning the Young Global Analyst Award is a fabulous achievement for Isaac and a fitting culmination to his time in the department. The quality of his intellectual insights into international relations and his determination to make a real positive change in the wider world of politics are typical of the best of our graduates. His participation in this WCIA-sponsored competition also exemplifies the department's determination to deepen its engagement with civil society groups in Wales and across the globe.”

Responding to winning the award, Isaac said: “It means a lot that I have won this award. I have been interested in the Israel-Palestine conflict for some time, but when it came to drafting my peace proposal, I put a lot of research and analysis into what could not only bring peace to the region, but also optimism for continued stability and growth. In terms of global conflict resolution, the Israel-Palestine conflict is the most difficult of tasks, but if it could be resolved it could bring hope to helping all human conflict in the world.”

“While studying for my degree at Aberystwyth University, I have particularly enjoyed modules that have allowed me to be creative, for example, designing posters when studying propaganda and drafting press releases in the ‘Behind the Headlines’ module.  Developing this peace plan fitted right in in terms of creativity and thinking outside the box.”

The winners of the 2021 awards were announced in a virtual ceremony on 9 July as part of the Llangollen International Musical Eisteddfod, taking place online from 6-11 July.

Established in 1947, Llangollen International Musical Eisteddfod was intended to provide a means of healing the wounds of the Second World War, and the aim to promote lasting peace in the world continues to this day.

As part of this year’s programme, Dr Jenny Mathers and Professor Berit Bliesemann de Guevara from the Department of International Politics were panel members for an Academi Heddwch Cymru Peace Pavilion discussion focused on peacebuilding and the lessons that can be learnt as we strive towards a more peaceful world.

The 2021 Eisteddfod also sees the world-premiere of a new choral piece composed by Paul Mealor, with words by renowned poet Mererid Hopwood, Chair of Welsh and Celtic Studies at Aberystwyth University. The piece is entitled Tangnefedd, the Welsh word for bringing together two elements in peace and harmony.  The performance at 6pm on Saturday 10 July will feature choirs from around the world that have successfully competed at the Eisteddfod.