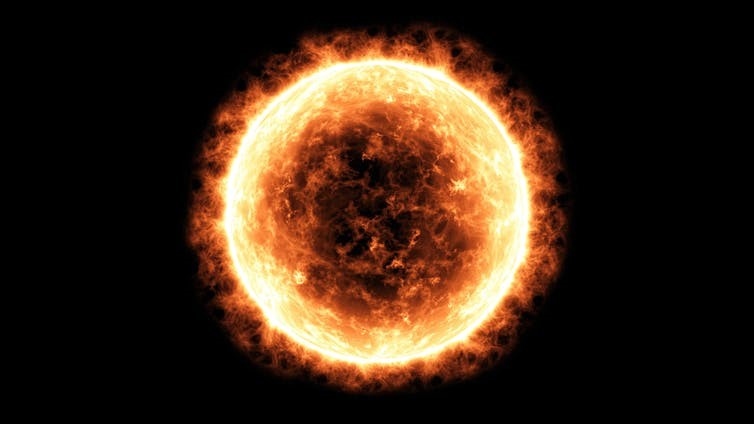 Writing in The Conversation, Dr Marianna Korsos and Dr Huw Morgan from the Department of Physics discuss how Alfvén waves, first proposed 80 years ago, could explain why the sun's atmosphere is so much hotter than its surface:

The visible surface of the sun, or the photosphere, is around 6,000°C. But a few thousand kilometres above it – a small distance when we consider the size of the sun – the solar atmosphere, also called the corona, is hundreds of times hotter, reaching a million degrees celsius or higher.

This spike in temperature, despite the increased distance from the sun’s main energy source, has been observed in most stars, and represents a fundamental puzzle that astrophysicists have mulled over for decades.

In 1942, the Swedish scientist Hannes Alfvén proposed an explanation. He theorised that magnetised waves of plasma could carry huge amounts of energy along the sun’s magnetic field from its interior to the corona, bypassing the photosphere before exploding with heat in the sun’s upper atmosphere.

The theory had been tentatively accepted – but we still needed proof, in the form of empirical observation, that these waves existed. Our recent study has finally achieved this, validating Alfvén’s 80 year-old theory and taking us a step closer to harnessing this high-energy phenomenon here on Earth.

The coronal heating problem has been established since the late 1930s, when the Swedish spectroscopist Bengt Edlén and the German astrophysicist Walter Grotrian first observed phenomena in the sun’s corona that could only be present if its temperature was a few million degrees celsius.

This represents temperatures up to 1,000 times hotter than the photosphere beneath it, which is the surface of the sun that we can see from Earth. Estimating the photosphere’s heat has always been relatively straightforward: we just need to measure the light that reaches us from the sun, and compare it to spectrum models that predict the temperature of the light’s source.

Over many decades of study, the photosphere’s temperature has been consistently estimated at around 6,000°C. Edlén and Grotrian’s finding that the sun’s corona is so much hotter than the photosphere – despite being further from the sun’s core, its ultimate source of energy – has led to much head scratching in the scientific community.

Scientists looked to the sun’s properties to explain this disparity. The sun is composed almost entirely of plasma, which is highly ionised gas that carries an electrical charge. The movement of this plasma in the convection zone – the upper part of the solar interior – produces huge electrical currents and strong magnetic fields.

These fields are then dragged up from the sun’s interior by convection, and burble onto its visible surface in the form of dark sunspots, which are clusters of magnetic fields that can form a variety of magnetic structures in the solar atmosphere.

This is where Alfvén’s theory comes in. He reasoned that within the sun’s magnetised plasma any bulk motions of electrically charged particles would disturb the magnetic field, creating waves that can carry huge amounts of energy along vast distances – from the sun’s surface to its upper atmosphere. The heat travels along what are called solar magnetic flux tubes before bursting into the corona, producing its high temperature.

These magnetic plasma waves are now called Alfvén waves, and their part in explaining coronal heating led to Alfvén being awarded the Nobel Prize in Physics in 1970.

But there remained the problem of actually observing these waves. There’s so much happening on the sun’s surface and in its atmosphere – from phenomena many times larger than Earth to small changes below the resolution of our instrumentation – that direct observational evidence of Alfvén waves in the photosphere has not been achieved before.

But recent advances in instrumentation have opened a new window through which we can examine solar physics. One such instrument is the Interferometric Bidimensional Spectropolarimeter (IBIS) for imaging spectroscopy, installed at the Dunn Solar Telescope in the US state of New Mexico. This instrument has allowed us to make far more detailed observations and measurements of the sun.

Combined with good viewing conditions, advanced computer simulations, and the efforts of an international team of scientists from seven research institutions, we used the IBIS to finally confirm, for the first time, the existence of Alfvén waves in solar magnetic flux tubes.

The direct discovery of Alfvén waves in the solar photosphere is an important step towards exploiting their high energy potential here on Earth. They could help us research nuclear fusion, for instance, which is the process taking place inside the sun that involves small amounts of matter being converted into huge amounts of energy. Our current nuclear power stations use nuclear fission, which critics argue produces dangerous nuclear waste – especially in the case of disasters including the one that took place in Fukushima in 2011.

Creating clean energy by replicating the nuclear fusion of the sun on Earth remains a huge challenge, because we’d still need to generate 100 million degrees celsius quickly for fusion to occur. Alfvén waves could be one way of doing this. Our growing knowledge of the sun shows it’s certainly possible – under the right conditions.

Read more: Nuclear fusion: building a star on Earth is hard, which is why we need better materials

We’re also expecting more solar revelations soon, thanks to new, ground-breaking missions and instruments. The European Space Agency’s Solar Orbiter satellite is now in orbit around the sun, delivering images and taking measurements of the star’s uncharted polar regions. Terrestrially, the unveiling of new, high-performance solar telescopes are also expected to enhance our observations of the sun from Earth.

With many secrets of the sun still to be discovered, including the properties of the sun’s magnetic field, this is an exciting time for solar studies. Our detection of Alfvén waves is just one contribution to a wider field that’s looking to unlock the sun’s remaining mysteries for practical applications on Earth.