Probing the dark side of life on Arctic glaciers 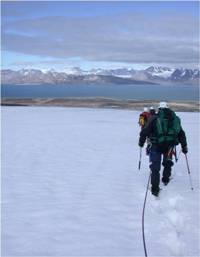 Aberystwyth University researchers have measured the “microbial economy” of a glacier for the first time, discovering how bacteria help melt glaciers.

The effect of climate change on glaciers and ice sheets worldwide has caused considerable alarm. However scientists at the Institute of Biological, Environmental and Rural Sciences and Geography & Earth Sciences (IGES) at Aberystwyth University working with colleagues at Sheffield and Bristol Universities have just added a twist to the tale by publishing the first “budget report” of life forms on the surface of a glacier in the Arctic in November’s issue of the journal Environmental Microbiology. “Although we know they are important in our climate system and are major reserves of freshwater, even a decade ago many scientists viewed glaciers as lifeless lumps of ice” says the study’s co-author, Dr Arwyn Edwards of IBERS. “But that is changing with the discovery of biodiverse and active microbial communities living on glaciers, and so it becomes important to understand how microbes interact with glaciers.”

The team set out to measure the “microbial economy” of a glacier on Svalbard in the Norwegian High Arctic by counting the number of cells entering, leaving and being stored on the glacier’s surface using a sophisticated new method able to count single bacteria in samples from glaciers “Previously we had to count bacteria one-by-one by eye using a microscope, which was tedious and prone to error” said Dr Sara Rassner, a former PhD student at IBERS and co-author of the study “but using flow cytometry means we can quickly make very precise counts of every cell containing DNA”. When the team analysed their data they found that an alarming number of cells are being lost from the glacier. Every hour, about 10 million cells are washed away by melt water from a square metre of the glacier’s surface. “If we assumed the glacier we studied is fairly representative of glaciers everywhere, they would lose at least 3.5 thousand trillion cells every summer, which is roughly the same number of cells estimated to be living on and in three billion people” said Dr Edwards.

Previous research has found ancient viruses, pathogens and antibiotic resistance genes preserved in glacial ice. Although the team were not able to identify the bacteria counted in the study, a new project led by Dr Edwards and funded by the UK Natural Environment Research Council (NERC) is set to provide further insight into the microbial biodiversity of glaciers. Dr Edwards said: “Identifying these microbes will be important to evaluate the potential impacts on ecosystems and people living downstream from glaciers.”

“The number of cells leaving glaciers is just one part of the story” says the study’s lead author, glaciologist Dr Tristram Irvine-Fynn of IGES, “we find that many more cells landing on the ice are being trapped there.” This is a particular concern because microbes glue together dust and tiny rock particles and darken the ice surface, which increases the amount of energy from the sun that is available for melting the glacier. “We are calling this phenomenon ‘biological darkening’ and it appears to be a significant factor which adjusts the rate at which glaciers melt away” he added.

The University of Sheffield