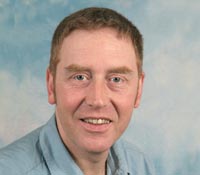 An Aberystwyth University scientist has called for the creation of a revolutionary new field of biodiversity conservation.

The Global Strategy for Microbial Conservation would aim to protect the smallest and most neglected forms of life in the natural world.

These organisms include bacteria, fungi and algae, many of which are wrongly seen in popular belief as ‘bad’ or ‘useless’.

However Dr Gareth W Griffith from IBERS – the Institute of Biological, Environmental and Rural Sciences – warns that failing to protect them could lose the planet a wealth of biotechnological resources and important habitats and even push some endangered animals and plants towards extinction.

Dr Gareth W Griffith argues that the current bias of mainstream conservation efforts towards protecting plants and animals could lead to the extinction of many important microbes without anyone even knowing. Their value would only be realised after they have gone.

The plea by Dr Griffith, a senior lecturer at IBERS has been published in the respected scientific periodical, TREE (Trends in Evolution and Ecology) and has already attracted comment.

The new strategy would concentrate on protecting these tiny micro-organisms and would  provide a complementary approach to the Convention on Biological Diversity’s existing Global Strategy for Plant Conservation.

“In addition to raising awareness of the huge diversity these small organisms, usually invisible to the naked eye, with many still unknown to science, it is important to publicise the fact that they a responsible for many vital processes that allow the planet’s ecosystems to function,” he says.

“All conservation efforts are ultimately funded by the public and here some education is also needed, to counteract negative perceptions (‘bad bacteria’ or ‘poisonous fungi’)”.

Contrary to perceived wisdom, he argues that many micro-organisms are not widely distributed and are in danger because of threats to habitats in which they occur.

The new strategy should focus in particular on the protection of the many habitats on earth which are dominated by microbes, and which are currently neglected because there are no larger forms of wildlife to be found there.

“Foremost among these should be endangered soil habitats and soil types, where the most diverse microbial communities exist”.

Also of pressing concern are the lakes beneath the Antarctic icecap. Russian scientists have drilled to a depth of 4 km and are within metres of the surface of Lake Vostok, third largest freshwater lake in the world.”

“The indigenous micro-organisms there, currently unknown and possibly unique, are at risk of destruction by introduction of surface life-forms when or if the drilling resumes,” says Dr Griffith.