Lie diet-tector: how scientists can reveal the truth about what you eat 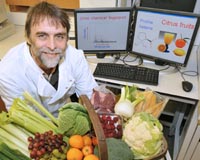 Researchers at Aberystwyth and Newcastle Universities have shown that they can determine which foods and in what amounts people have eaten over the last few days by analysing their urine.

What we eat has a big impact on our health but it is very difficult to measure exactly what, and how much, people eat in everyday life - and people find it difficult to record honestly.

Measuring what people eat can help prevent illness by showing definite links between particular kinds, and amounts, of foods and specific diseases.

By testing urine for the chemical ‘fingerprints’ of different foods, the scientists’ recent research demonstrated that they could determine whether individuals are eating healthy diets or not.

The chemical ‘fingerprints’ they identified are substances called metabolites which are unique to different foodstuffs – those for healthy foods such as raspberries, salmon, broccoli and orange juice have already been identified.

The next stage for the scientists at Aberystwyth and Newcastle is to develop a simple test with the potential to revolutionise health care by determining whether people are eating a healthy diet or not.

The new test is being developed by Professor John Draper and colleagues at IBERS (the Institute of Biological, Environmental and Rural Sciences) at Aberystwyth University and by Professor John Mathers and his team in the Human Nutrition Research Centre (HNRC) at Newcastle University.

The scientists believe the test will even be able to distinguish between similar foods such as whether someone has eaten red, white or processed meat and so help in understanding links between these foods and health.

“This kind of test has enormous potential as a weapon against many chronic diseases,” said Professor John Draper of IBERS, who is leading the work at Aberystwyth.

“It will help doctors, nurses, dieticians and nutritionists to work out what their patients have been eating.

Newcastle University’s Professor Mathers added; “In the longer run, this kind of test will help to uncover new links between eating patterns and health.

“As our knowledge about metabolite markers of other foods grows, we will be able to add these to our test and it should mean that researchers will be able to say for certain which foods help protect against specific diseases and which we should encourage to promote better health.”

The longer term aim of the research is to develop a simple dipstick test – a sensor dipped into urine which will provide an instant readout of the main foods that the person has eaten.